IN THE LOOP: MONSTA X’s ‘Beautiful Liar’, ‘I ≠ DOLL’ Huh Yunjin, More of This Week’s Most Popular K-pop


January 2023 has just started, but K-pop idols are already filling the music scene with high-quality music!

Among K-pop idols, H1-KEY, MONSTA X, LE SSERAFIM Yunjin, SF9, and VERIVERY provide the most popular releases in the second week of this month! 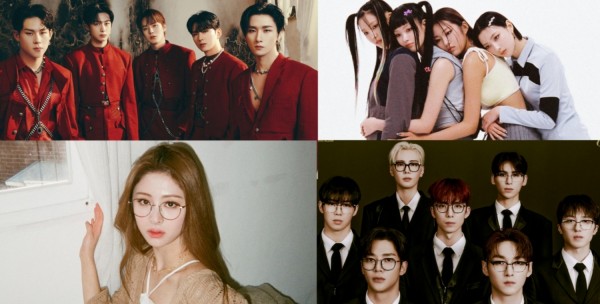 Starting with a girl group, H1-KEY set the bar high with their first mini album.”Roses.”

Upon its release on the 5th, the song topped the iTunes album charts in Bahrain and Turkey. The album was also listed on iTunes and Apple Music albums in seven countries, including Singapore, Mexico, Australia and Thailand.

With this release, the group rose as a “girl crush” group, certified by Spotify, the world’s largest music streaming company after HI-KEY was selected as the cover of their “Spotify Girl Crush” playlist.

MONSTA X also showed off their position as representatives of the third generation by releasing their new song.”Beautiful liar,” the title track of their 12th mini album, “REASON” on the 9th.

The title track “Beautiful Liar” describes the reason love is found in the most dangerous of relationships. The song also sings of the theme, “dangerous emotions that can never be rejected, love that cannot be let go while continuing a dangerous relationship.”

The same day, the mini-album, “Reason,” was released in which six tracks tell the story of finding a clear reason for existence in various relationships and finding meaning in one another.

SF9 is finally back!

On the 9th, they solidified their influence with their 12th mini album, “THE PIECE OF9.”

The album contains a total of six tracks, including the title track “Puzzle”. According to Dawon:

“This is an album that contains the full team content by putting together the scattered pieces like a puzzle. We’ve turned into a mysterious and classic agent this time. I think it would be good if you look forward to more mature music than before.”

“This album is SF9’s most satisfying concept album yet.”

Huh Yunjin is still a rookie, but she has already secured her position as a singer-songwriter outside of LE SSERAFIM!

On January 9, Yunjin released her second self-composed song “I ≠ DOLL” on the group’s official YouTube channel. The MV was produced in an animation format featuring characters drawn by Huh Yumjin himself.

“I ≠ DOLL” is a rock-based trap song, which conveys the message that she shouldn’t be led astray by her looks and lose her inner worth.

In addition, the song says that an idol is not a living being like a doll in a woven frame, but a strong person who shows extraordinary talent in several fields and is otherwise lacking but struggles to improve.

In the published video, VERIVERY immediately captivated the audience by performing the song in white costumes reminiscent of pure white princes when they brought a comfortable feeling with their melodious vocals.

In particular, the song was prepared as a gift to VERRER (fandom) to commemorate the 4th debut anniversary.