Single Inferno 2 did well, and one contestant has become a standout favorite among international viewers. 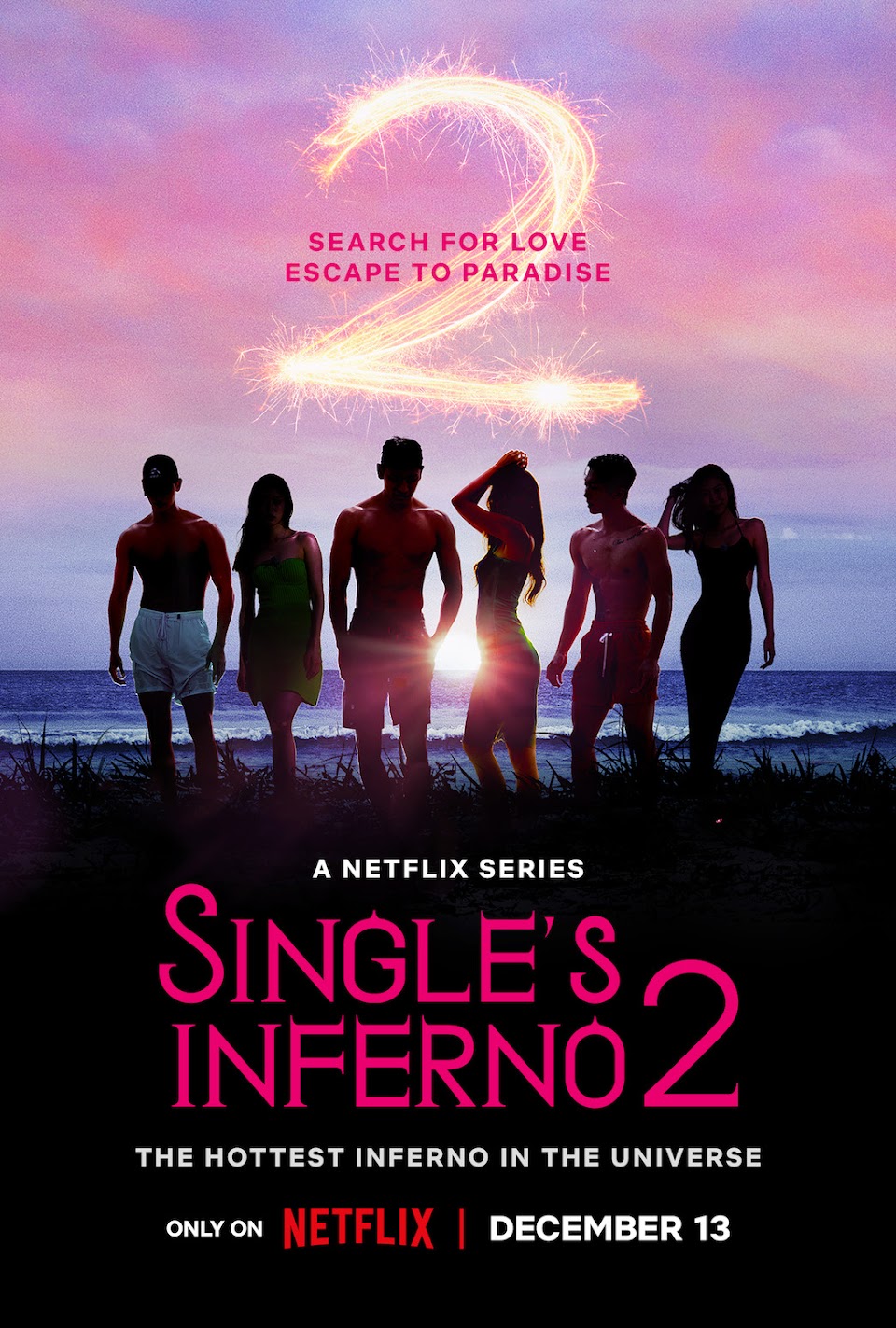 NetflixKorean hits dating show Single’s Inferno is back with its second season on December 13th. We have now briefly introduced the ten contestants, five females and five males, finding out their names, some hobbies, and their dating “types.” They hope to find love on the desert island “Inferno”, and if their feelings are reciprocated, the “couple” will escape to “Paradise” (a resort).

Of all the contestants we met, Lee Nadine became an instant favorite among viewers, especially international ones. He is the only contestant who speaks English better than Korean.

In Episode 1, Nadine describes herself as having a cold and honest personality, but admits that her voice sounds “softer” when speaking in Korean. He joined the show to get out of his comfort zone and dating.

Despite identifying as a cold person, she seems more shy than that. Nonetheless, she got along well with one male contestant, in particular: Shin Dongwoo.

When the contestants first arrived, Shin Dong Woo sat in the empty space between Nadine and Shin SeulKi.

He caught Nadine’s attention as he made his way to the island. And he quickly struck up a conversation with her.

Nadine and Dong Woo finally toured the island with Kim Han Bin. During that time, Dong Woo kept talking, asking lots of questions, which seemed to imply that he was attracted to him.

While Dong Woo confessed on camera that Park Se Jeong had caught his eye first and fit “his type”, he sent his postcard to Nadine at the end of the day. He referred to their conversation about working out and exercise by writing, “We should exercise together sometime.”

On the other hand, Dong Woo received two postcards. Shin Seul Ki wrote, “Let’s go fetch water together tomorrow,” referring to their trip to fetch water from the previous day for dinner,” and Nadine wrote, “Purple looks good on you!!” She confessed to the men that she was confused after reading the postcards.

At breakfast the next day, Dong Woo returned to sit next to Nadine. However, he continued to talk to Seul Ki, and they later hung out with a smaller group.

Seul Ki continued to show interest in Dong Woo throughout Episode 2, approaching him alone. Later, she told the men that she thought she was “cute” and that she wanted it “talk more.”

Nadine told the women she felt “awkward” in her interactions, struggling to get close to the men she liked. But they, including Seul Ki, pushed him to do it. So he did.

Dong Woo and Nadine go on a “water date”. They sat for a while, talking about their feelings. He even gave her a compliment.

Nadine apologizes for her short answers from the previous day and thanks her for helping her become more comfortable. However, he implied that he had no interest in going to Paradise.

Dong Woo tells him he needs to. Her mindset is that it is not a priority because she loves desert island “adventures”.

But if she goes, she wants to go with someone she really likes and wants to get to know better…

This triggers Dong Woo to mention wanting to get to know more people.

He was the other way around. Nadine only thinks of one person.

So, when the time came for the contestants to choose their partners to go to Heaven with, Nadine chose Dong Woo who didn’t choose her, leaving him to live in Inferno. This shocked the viewers and the panel.

Dong Woo finally goes to Heaven with Seul Ki. There, he is aggressive in asking questions and expressing interest in her. However, he was even more awkward and hesitant to express his feelings. There is little to no chemistry. We find Dong Woo is a 32 year old doctor specializing in plastic surgery while Seul Ki is a 25 year old piano major at Seoul National University.

When they returned to Inferno, they were more confused as to where they stood than before. Before long, a new man, Kim Jinyoungwas introduced, which appealed to all the women, especially Seul Ki and Nadine.

He ended up winning the men’s game to dine with two women of his choice and, interestingly, chose those who had just gone to heaven.

Nadine then spoke briefly with Jin Young, and they seemed to hit it off. In particular, Dong Woo kept looking back during their conversation.

In the end, when it came time to choose who they wanted to go to Heaven with, Nadine chose Dong Woo over Jin Young, and Dong Woo chose Nadine (you can’t choose the same person you just went to Heaven with).

However, viewers have mixed feelings about the choice. Soon, Nadine became a trending topic on social media.

Everyone is so excited for Nadine to finally go to heaven…

But no one wants her to go out with Dong Woo.

Everyone is happy Nadine will be able to go out, eat good food etc. After that, they hoped that Nadine had nothing to do with Dong Woo.

i HATE her but i just want Nadine to eat good food for one day #SingleInferno2 #SinglesInferno2EP3 pic.twitter.com/ObqA5wY2dh

Nadine You should enjoy your time in heaven, eat good food and sleep well then come back soon YOU HAVE NO RELATIONSHIP WITH THAT DONGWOO#SingleInferno2 pic.twitter.com/egAsvSOZrD

Viewers agree both Nadine and Se Jeong are too good for men, who seem blind to recognize their worth.

Nadine & sejeong are the best girls there, they deserve better. These guys have NO TASTE, you got Nadine and sejeong in front of you but you still choose the same 2 girls?? dongwoo & seulki don’t have chemistry, he should go with sejeong #SingleInferno2 pic.twitter.com/8f8oXTFStg

best girl nadine and sejeong but the first one went to heaven with the wrong guy and no one still chose the last one which is so awesome to me #SingleInferno2 pic.twitter.com/vFViKmhJvx

Nadine is not only sweet and athletic and beautiful, but she is also one harvards students studying neuroscience. So, netizens are anticipating Dong Woo’s reaction.

I can’t wait for Dong-wook to find out that Nadine went to Harvard and became a pre-med student… you know why pic.twitter.com/KydAXHoIju

Nadine is a better person than I am, because if *I* were a model who went to Harvard, the intense intensity of my arrogance could power the entire eastern seaboard’s power grid.#SingleInferno2#SinglesInferno

But most of the viewers are pinning their hopes on her and Jin Young’s new man. Many felt they had chemistry and should have chosen each other to go to Paradise.

Nadine and Jinyoung I feel the chemistry physics of biology and everything just by the way they look at each other and the little exchanges they make 🦋🦋🦋🦋#SingleInferno2 #SinglesInferno2ep4 pic.twitter.com/pNiNzLG3N1

Nadine went to heaven with Dongwoo and not Jinyoung..#SingleInferno2pic.twitter.com/yzU8eTQOhV

BUT STILL WAITING FOR NADINE x NEW BOY THEY HAVE A SPARK I CAN FEEL IT 😁🤞🏾‼️#SingleInferno2 pic.twitter.com/SV39rYT7q7

But do we now have other potential suitors Joo Yoon Jaewho had never shown interest in Nadine before?

WHAT THE FUVK plot twist of the century 😭😭😭 my man never even talked to Nadine??? except they talk like for 1 minute off camera and yoongjae somehow develops feelings again I’M CRYING#SingleInferno2 #SinglesInferno2EP4 pic.twitter.com/m8zOW5k6Nl

Only time will tell.